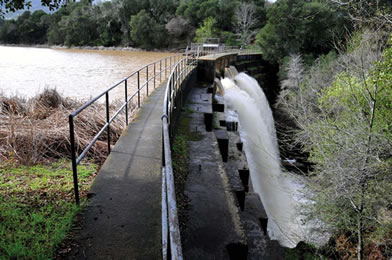 Time for the Cardinal to dump their damn dam

You’ve never fished San Francisquito Creek. And if something isn’t done about Searsville Dam, you never will. Stanford University owns the dam, which was built in 1892. It buries the confluence of five redwood- and fir-shaded salmon creeks that now run salmonless out of the Santa Cruz Mountains. They all came together beneath what is now the Searsville impoundment to create San Francisquito Creek, which winds through Palo Alto and out into San Francisco Bay.

The dam produces no hydroelectric power. It provides no potable water and no flood control. Siltation has reduced storage capacity in the reservoir by more than ninety percent. Its last full, state-certified safety inspection occurred the same year some of Stanford’s Vietnam protesters made national news for shouting down Vice President Hubert Humphrey. It sits precariously adjacent the restless, explosive San Andreas Fault. When the next big one hits—should the dam fail—a map produced by county planners shows downtown Palo Alto, Menlo Park, and the Stanford campus itself would be devastated. The State of California has designated Searsville a “high hazard” dam and predicts that failure would result in loss of life.

Meanwhile, the coho and chinook salmon of San Francisquito Creek are extinct. Steelhead are listed in critical condition under the Endangered Species Act. California Fish and Game requires a permit for dams like Searsville that Stanford does not have and probably couldn’t get. Yet Stanford still operates the dam without releasing water downstream when it’s needed most. This translates to a chronically dewatered creek for a critically endangered fish. Searsville’s sole purpose is to green Stanford’s thirsty golf course and parts of the university’s lush 8,000-acre grounds. The time-honored western practice of lavish irrigation doesn’t jibe with what Stanford President John Hennessey wrote in his “sustainability report” just last year: “Sustainability must become a core value in everything we do. As a community we are committed to developing our core campus in a sustainable fashion that preserves what we cherish, that demonstrates leadership in the university’s commitment to be a good environmental steward.”

The de-watered chasm between theory and practice aside, the National Science Foundation recently awarded Stanford an $18.5 million grant to house a faculty-led think tank called Water in the West, which promises to “engage in a strategically designed set of research and policy initiatives to develop and demonstrate solutions to the major water challenges facing the western United States.”

To Matt Stoecker, who grew up in Portola Valley, just upstream of Searsville, Stanford’s policy at Searsville demonstrates a vexing, but age-old problem of the western water challenge, summarized in the lines spoken by some veteran bard of the western water wars: “Over the hill and out of view, I live upstream my dear neighbor, so to hell with you.” Stoecker, a restoration ecologist by trade, is director of Beyond Searsville Dam, a coalition of watershed advocates that would like to see San Francisquito become a perennial stream again. But Stoecker isn’t getting much help from Stanford.

“For over a decade, Stanford’s course of action at Searsville has been inaction,” Stoecker says. “Stakeholders in the watershed carried out a Searsville Workgroup process in 2001, which identified the issues and study needs at Searsville. We even had the State offer to pay for a huge study to identify options and expected outcomes for the dam. Stanford turned this offer down in favor of stall tactics and denial about their illegally-operated dam.” Stanford has appointed a faculty committee to make a set of recommendations about what should be done at Searsville Dam. Their deadline is two years out.

Phillipe Cohen is the co-director of the Jasper Ridge Biological Preserve. He thinks San Francisquito Creek is unique, too, but not for the same reasons Stoecker does. Jasper Ridge is 1,200 acres of pastoral Stanford real estate surrounded by a high chain-link fence, where students come to study bats, birds, frogs, and turtles. Searsville Dam and reservoir sits in the middle of the preserve. Standing atop the crest of the dam, Cohen describes the complexities of managing water here.

“It’s not just steelhead, we have a total of five endangered species on Stanford property. Three of them besides steelhead also rely on the water here, and we have to consider their habitat needs as well,” says Cohen. “And our primary concern is the health and well-being of everyone downstream. You can’t just blow up the dam and hope it all settles down in the stream bed. The design and engineering of the structure are unique to the state of California, and perhaps the nation. We might not be able to get rid of it without considering the historic value of the dam itself.”

It’s strange to hear the co-director of a biological preserve at one of the world’s foremost research institutions weigh the future of listed endangered species against a possible listing for a dam on the national register of historic places. With an eye toward those laudable virtues of environmental stewardship, can a dam with a reservoir almost totally full of silt really be “structurally sound?”

In spite of the long impasse, it’s still too soon to write the epitaph for San Francisquito steelhead. The Beyond Searsville Dam coalition is a growing tapestry of business owners, Stanford alums, fly fishers, and river-centric non-profits that see an opportunity to create a blue-ribbon urban watershed restoration project of national import. Stanford may yet choose to lead instead of follow this process. The new director of that Water in the West think tank is Andrew Fahlund, who spent 15 years with American Rivers and became intimately familiar with the cumbersome process of dam removals all over the country.

Fahlund sees an opportunity to lend his program’s expertise at Searsville. “One of our goals is to study urban watersheds, and San Francisquito Creek qualifies,” says Fahlund. “At some point this is something I imagine we’ll be taking a look at.”

Taking a look at it soon enough, maybe, to tie up a new steelie fly, call it a Green-Butt Cardinal, and not be angry about it.