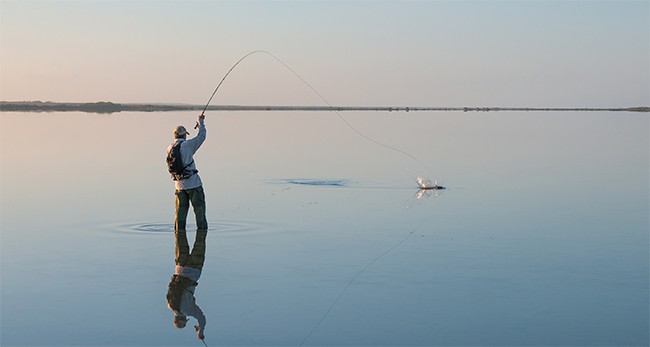 The act of walking across a white-sand flat, knee-deep in endless shades of blue, is made much more interesting by bonefish. Especially if you’ve never caught one. After a few days spent searching empty water on the Bahamian island of Exuma, we drove down a twisted dirt road, past rotting cars and abandoned dishwashers, and finally found a promising flat. We were DIYers, looking to catch them on our own, but only if Ray didn’t kill us first.

Maybe if our rented Isuzu Trooper had come with the steering wheel on the right, it would have reminded Ray that things are reversed in the former British colony. He was fine on the straightaways, but intersections and turns were a challenge, with Ray often turning into oncoming traffic. Andy, Shane, and I thought this was funny, possibly because the rig was such a piece of shit that it didn’t matter when it was forced off the road in a cloud of coral dust and Bahamian curses. Ray’s driving was frightening. So we made him drive everywhere.

Cruising around a tropical island with friends and a cooler full of Kaliks is great when you’re finding bonefish. But when your “map” is a page of drunken scribbles that’s left you fishless for three days, even boozing with your buddies loses some luster.

There is no more intimate way to fish than to wade a saltwater flat. Your pace is slowed, your senses heightened, and your eyes are focused on the water in front of you. At first you think everything is a bonefish—that clump of turtle grass, that buried lobster pot, that Heineken bottle, that starfish. But eventually your eyes adjust. You stop falling for ’cuda and start recognizing needlefish. You keep wading, lost in the moment, until a pesky lemon shark scares you from behind. You regain your focus and continue to wade.

Suddenly, you catch movement. Your pulse quickens, you ready a cast, and then… boxfish. You press on, feeling slightly let down. And then, coming across a bright patch of sand, you see shadows. Six, no, 10 of them at least, working slowly toward you, cutting back and forth across the current. One of them tips down, there is a puff of mud, and the shadow materializes as a flash of barred green and silver with a hint of blue. He eats your fly and explodes.

Seeing a roostertail behind your first bonefish as it tears across a flat is an unforgettable visual, but the noise it makes is even better. You pull hard against it until the fish begins to slow. Its second and third runs are shorter, not as powerful. Over a bit of white sand you see it—the bonefish’s dark back so apparent that you wonder how you’ve ever missed them. Soon the fish is in your hand. Its eye is bigger than you expected, almost human-looking. And now you realize that the inferior jaw that so many magazine photos had you thinking was a sign of weakness; is actually chromed perfection.

Capt. Pete Rowney is a Florida Keys fishing guide who says that 2014 has been his best snook season in years. 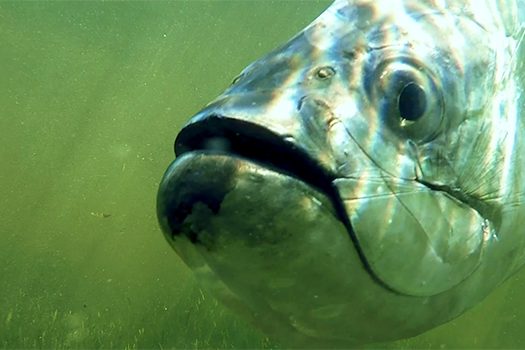 Journey of the Silver King