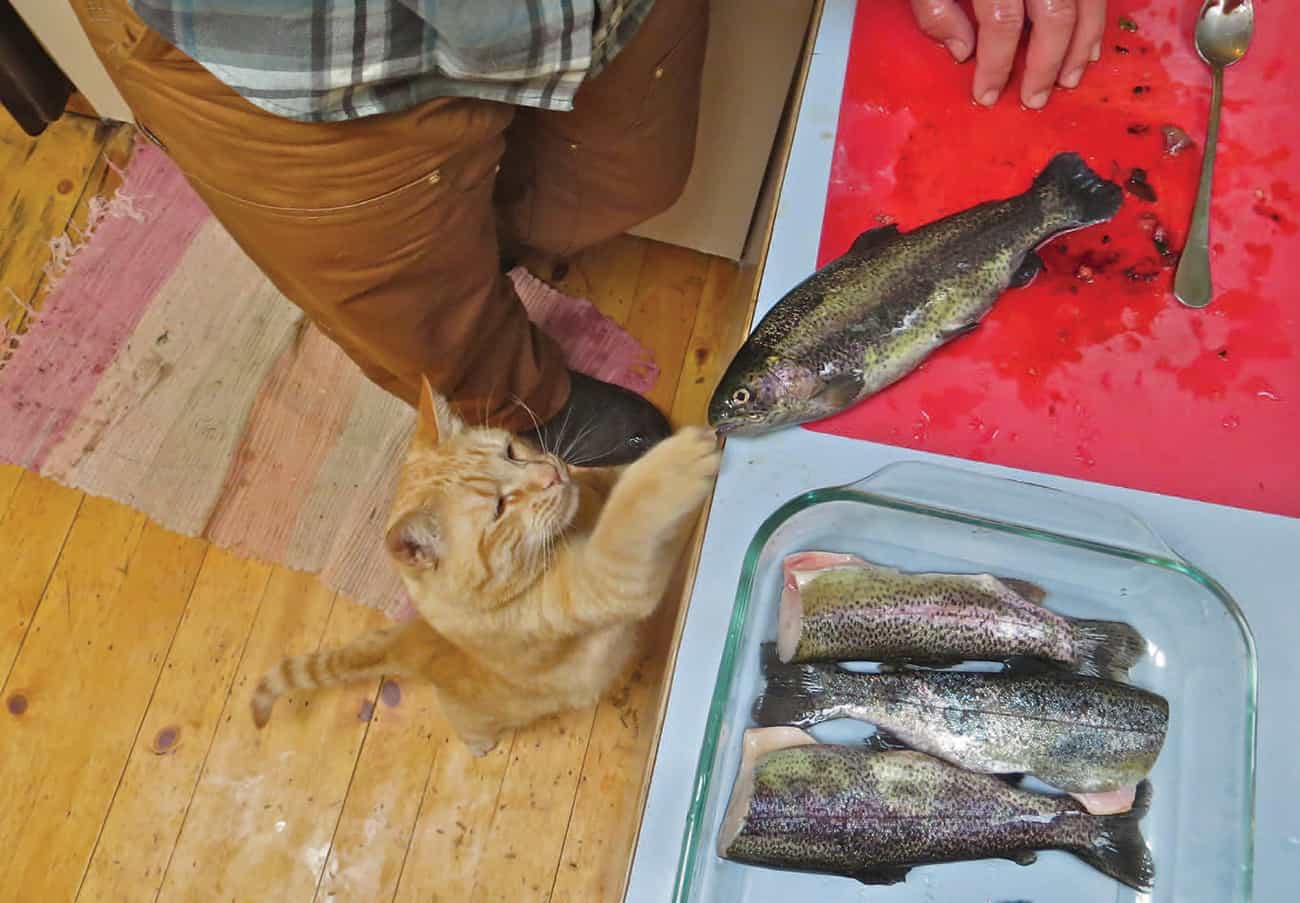 If My cats were talking cats they would ask me the same question my father does: why don’t you keep the fish you catch. Why are you so spineless, so un-hungry, so thoughtless as to our longsuffering? I’ve released countless fish, many which could have turned a day into legend for my dad. We didn’t have much luck on the water when I was growing up, and the thought of releasing anything of keepable size is akin to saying there’s no God. Heretical. Where I’m from you get disowned for that shit.

As a kid, I desperately wanted to catch a good-sized fish for my dad. After our best day on the water, a muskrat ate all the bluegill off the stringer trailing our banana-yellow canoe. Each time I release a fish I think about this. Each time I play a fish and feel the weight and strength and pull, I think about how proud I would have been to give this fish to my dad to put on his charcoal grill. How he would stack the briquettes and the smolder would turn to smoke and fire and finally ember, and how the whole family would eat my fish while talking about what a great job I’d done.

Several years ago we realized our cabin had a mouse problem and we adopted two ginger cats, brother and sister. You’re lucky, the lady from the rescue place said, You’re going to live with fishermen. My partner Jay and I nodded and smiled and felt a bit like poseurs—we’re not that kind of fishermen. This lady was misled. A few years later a feral ginger showed up so now we have three and it looks like we have a type. They are cabin cats; working cats. Patrolling the perimeter like junk yard rotts.

“Someone said that cats are the furthest animal from the human model,” wrote William S. Burroughs in his book, The Cat Inside. “It depends upon what breed of humans you are referring to, and of course what cats,” he continued.

“I find cats uncannily human on occasion.” And perhaps it’s their opportunism, taking advantage of any luck that comes their way, however small. As anglers do with chop on surface water, rainy-day hatches, shifts in wind that work in your favor.

Every spring the state park up my road stocks their ponds with rainbow trout, for kids who will fish with their families over Memorial Day weekend. Some, kicking off the summer with no luck even with worms and bobbers and hundreds of pellet-fed fish. These are good days they’ll remember. These are bad days that’ll turn their spirit to grit like TED Talks says is good for adulthood successes.

And every spring, I fish there too. It feels strange and familiar, like driving your hometown main street after a decade away. You do things differently now, but can fall back into whoever you were at the time without much effort. You pull out a Dwight Yoakam CD and only feel a twinge of embarrassed nostalgia.

The sun hasn’t crested the mountain valley yet, and steam rises from the lake and puffs from my mouth like I’m a smoker. I tie on a small black leech pattern and catch my limit before breakfast. I carry my soft-cooler past lawn chairs and barking Yorkshire terriers and toddlers with Power Ranger poles. I go home to my cats. They are waiting. This time, happy with me. They gather like a tribe of lions around my kills. I throw flakes of pink trout-flesh to the floor, where they hiss and frenzy and get innards if they want them. Only the feral with the funky tail does.

The trout go into the smoker for eight hours and I stick some in the freezer for next time I see my dad. He’ll be happy with me too.

I watch my cats catch mice in my cabin and around my garden and they don’t want the fun to be over too quickly. They claw and throw like WWF wrestlers and the mouse runs and they go full speed and the sequence runs over again like a scratch in film. I feel sorry for the rodent before the drama’s over, even though it’s been eating potato chips and pooing in bags of rice, and if the cat’s feeling particularly cheeky I put a foot down, because This house is not a house of torture, I say, sounding all UN. I release the mouse outside.

The next day I’ll tie on an elk-hair caddis and do a variation on that theme on a river where a dozen other anglers are doing it too. All unphased because we let the trout go. We’re just playing. Uncanny. Just like cats and mice.

[Erin Block lives in the mountains of Colorado. She is a librarian, a freelance writer, and author of The View from Coal Creek and By a Thread.]