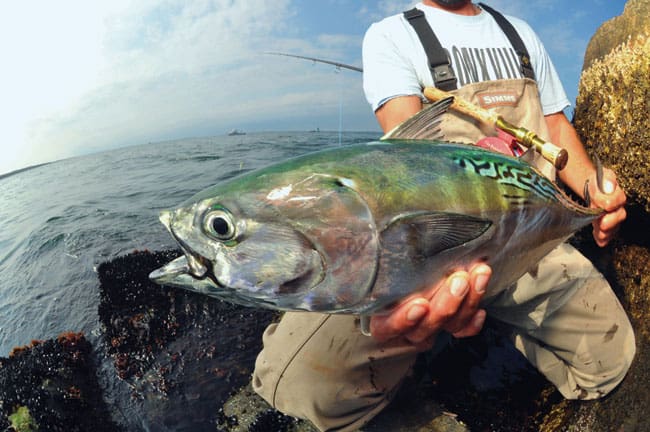 From Maine to the Gulf of Mexico

Off the coast of New Jersey a fly angler named Ed Janiga hooked and landed a five-pound false albacore near Mantoloking. He stuck a tag from the American Littoral Society into its caudal peduncle, the thin strip of meat between the second dorsal and the tail fin. Eight months later a commercial fisherman named Wes Stevens caught Ed’s albie off the coast of Pompano Beach, Florida—reportedly to sell as marlin bait—and noticed tag number 778562 sticking out of its back. He returned it to the Littoral Society, the first time a tagged false albacore had been successfully documented.

The transaction tells a lot of the story of false albacore, a fish that as little as 30 years ago was thought of as nothing more than a foul tasting trash fish that tangled bluewater trolling spreads and served no purpose other than to be cut into strips and skirted to entice billfish.

“They were absolutely a nuisance fish,” says Tom Gilmore, one of the pioneers of casting flies to false albacore. “I had trouble getting a guide to even try.”

One surface bust and a deep run into his backing convinced Gilmore that he needed to try more. As his obsession grew, the lack of information on the fish compelled Gilmore to write False Albacore, his definitive book on the subject.

False albacore are now considered one of the premier light tackle species along the Atlantic Coast, due largely to the efforts of fly anglers. Guys like Gilmore and Tom Earnhardt and Buzz Bryson in North Carolina, and Scott Hamilton and Rick Grassett in Florida.

Gilmore happens to be one of the founders, along with Edward Janiga, of the Coastal Flyrodders club of New Jersey. The club and its members have a particular affinity for chasing albies all over the Northeast. One of its members, Howard “Woody” Woodbury, decided to approach the American Littoral Society about tagging false albacore after a noteworthy trip to Montauk. They’re in for only a short stretch of the fall, where did they go after that?

Gilmore, through researching his book, theorized that there were two schools of albacore, one that migrated along the Atlantic Coast from Maine to North Carolina and another that migrated from the Gulf of Mexico around Florida and up to the Carolinas, an idea that might account for the larger fish at Harker’s Island and South. But Janiga’s fish shows they move up and down the coast, regardless of size.

At first, the American Littoral Society wasn’t interested in following them. Its tagging program is built around inshore species like striped bass and fluke. But the passion to learn more about albies struck Jeff Dement, the director of the marine fish tagging program. That and the fact the fish is still largely—and surprisingly—an unknown quantity.

“Very little work has been done on them because they are not commercially important,” says Dement. So he set the Coastal Flyrodders up with tagging kits and let them have at it.

Janiga’s fish shows their pelagic nature, running up and down the Gulf Stream with the warmer water, chasing baitfish they herd into balls and slash on the surface.

“It’s such an ephemeral fish,” says Dement. “It’s present for such a short time in the ecosystem and then it’s gone.” They’ll be on the beach blistering through bait one morning and vanished the next. Which makes them so hard to study. But the hope is that the tagging program will officially establish the fish’s wide geographic range, from Maine to the Gulf of Mexico.

Gilmore’s research for his book turned up indirect evidence that the ocean is warming—30 years ago the false albacore didn’t consistently make it as far north as Nantucket. Now the area around the Cape harbors a consistent season. Could the tagging program show they’re adapting?

For Gilmore the hope is that the tagging program will lead to further study; and it will inspire fly-rodders and other anglers to lobby for gamefish status for false albacore—taking them out of play long before some commercial operation decides they’d make good dog food. 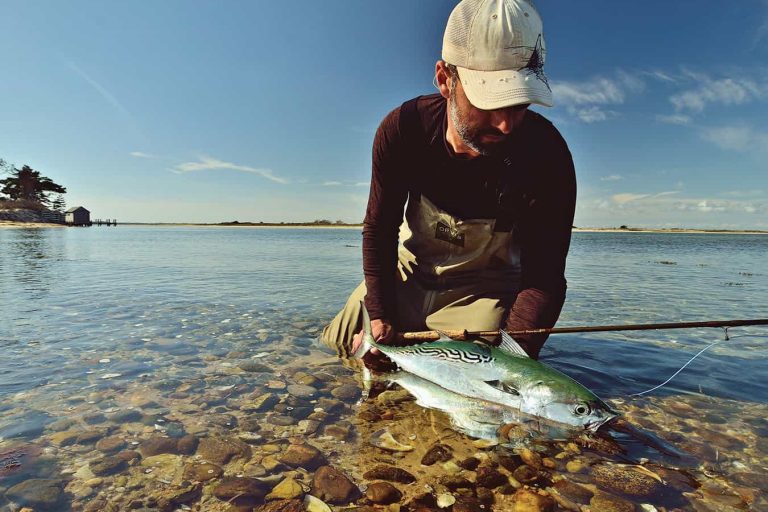 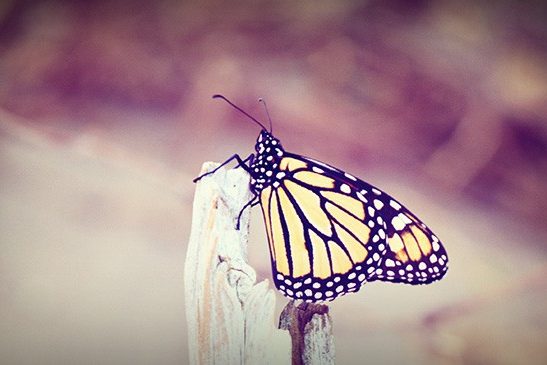