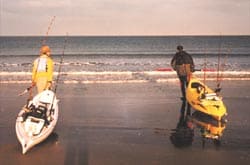 The game, it seems, is to see who can use the smallest boat to catch the biggest fish. And Adam Kimmerly is getting good at it. Kimmerly discovered sit-on-top kayak fishing a little more than a year ago, not long after moving to San Diego. Now it’s his passion.

“I went out on the ocean in party boats three or four times but it was too expensive,” says Kimmerly, a 20-year-old student and life-long freshwater fisherman. “Sit-on-tops are better because they give you so much freedom, you’re closer to the water and it doesn’t cost hardly anything once you have your equipment.”

Kimmerly recently landed a 52-pound white sea bass off La Jolla Shores, and an 18-pound yellowtail that took him over half an hour to bring in. But that’s nothing. “My friend caught a 115-pound thresher shark off Carlsbad that took him over an hour and a half to land,” he says. “Towed his boat over a mile.”

Kimmerly often fishes after he comes home from school or work. “If I have a three-hour window I can go out and have a great time,” he says during a break from a sit-on-top kayak fishing contest on Mission Bay. He fishes almost every weekend with a group of 10 friends who also use sit-on-tops.

Though new sit-on-tops can cost upwards of $1,000, Kimmerly went the inexpensive route, paying $300 for a used Perception Kahuna that included a paddle, seat and life jacket. He got a fish finder off eBay for $100, and he uses an old motorcycle battery to pump water into a small tank that can keep a dozen eight- to 10-inch mackerel alive for six hours.

“Other fishermen think we’re nuts to go out in a little kayak, but it’s a lot of fun,” says Kimmerly, who sometimes launches at 3:30 a.m. to catch bait by the Scripps pier. He finds calico bass in 10 feet of water in the La Jolla kelp beds, and yellowtail from 80 to 180 feet on the edge of kelp forests about a mile from the beach. His buddy caught the thresher shark two miles off shore.