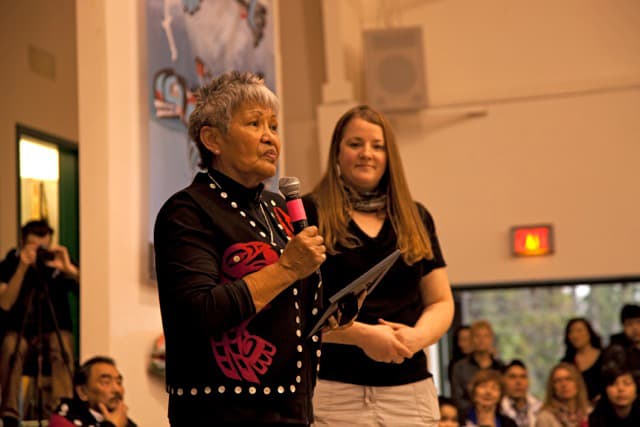 Looking out into the standing room only crowd packed into Kitsumkalum Hall in Terrace, British Columbia, Shannon McPhail, Executive Director of the Skeena Watershed Conservation Coalition (SWCC), needs a reality check. She asks the crowd, just shy of 1,000 people: “Is this actually happening?”

There are myriad events on this February day she is probably questioning. Sure, it might seem surreal that members of British Columbia’s First Nations are celebrating an ancient “mixing of the waters” ceremony that for the first time includes non-First Nations participants. Or that after the ceremony, one of Canada’s highest ranking government officials asks to take a vial of the ceremonial water back to Parliament to demonstrate how real government works. But really she questions her reality for the simple reason everyone is gathered. This party is a culmination of almost a decade’s worth of work and collaboration, which resulted in the permanent protection of British Columbia’s Sacred Headwaters from coalbed methane, petroleum, and natural gas extraction.

As the source of the Stikine, Nass, and Skeena Rivers—considered some of the richest steelhead and salmon watersheds on the planet—the 400,000-hectacre Sacred Headwaters, with their huge reserves of natural gas under Mount Klappan, caught the attention of Shell Canada, Ltd. in the early part of the century.

Shell, however, underestimated the power and unity of these small B.C. communities and their opposition to drilling, which in the end was the company’s downfall. Early actions by the global corporation included having First Nations elders arrested for blockading roads and threatening them with injunctions. These elders, members of the Tahltan, sought legal representation, at which point Shell realized they had no case and moved for an adjournment. “Every angle Shell tried to play,” recalls McPhail, “the elders and others were waiting for them.”

This was about the same time that McPhail—a welder by trade with a resume that includes hunting guide, whitewater guide, nutritionist, fork-lift operator, mill worker, and who up until nine years ago thought a cabinet minister was a carpenter—realized the serious threat Shell and other fossil-fuel and mining companies posed to her home, community, and “grocery store.” So in 2004, she, along with a few other concerned residents founded the SWCC, and formed plan to work with the communities and First Nations to protect their region from unsustainable industrial development.

“When you have the Tahltan protecting the birthplace of the Stikine, the Nass, and the Skeena watershed,” says McPhail, a fourth-generation British Columbian and mother of two, “and you have all the downstream First Nations and communities vowing to protect those rivers, and saying ‘thanks’ to those that are protecting the sections that they don’t lay claim to, then what you have is this unified wall that nobody can get through.”

That’s exactly what happened. Last December, during the final days of the four-year government-imposed drilling moratorium, B.C. politicians announced that Shell would be withdrawing its plans and there would be no more tenures issued for oil and gas development in the Sacred Headwaters. “When you mess with our salmon,” she says, “you’re going to get an ass-kicking.”

“And if you wanna do business up here,” she adds, “you need social license. That is a big keyword up in the North.”

Even McPhail’s husband, one of the strongest supporters and funders of the SWCC, works as a welder in the oil fields of Alberta to help support her “SWCC habit” (up until last year, all SWCC staff were volunteers, with 80-hour work weeks the norm), yet drives his truck to work plastered with a ‘Get The Shell Out’ bumper sticker. 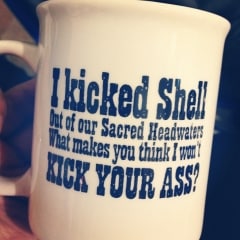 Up next for the SWCC and First Nations is a process to determine what protection is the best fit for the Sacred Headwaters and all stakeholders, whether that is a National Park, conservancy, or an Indigenous Community Conservation Area (ICCA), which recognizes both the rights of the First Nations and the convention for biological diversity.

“In the North, we are lucky that we have people that are motivated to do this stuff,” McPhail says. “We aren’t career environmentalists. When we started, we were just fighting for our homes. We are just people who love our community and we are going to fight for our community. When you get to be connected to your work, so right down deep in your heart and you know you are doing something good and something right, that feeds things that are far more important than your bank account.”