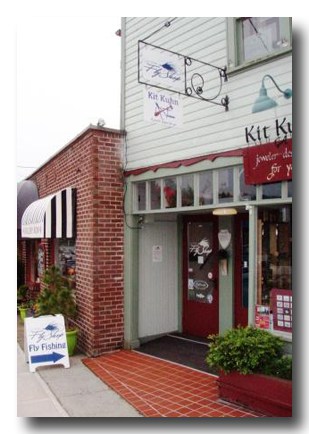 Most people with a shred of business sense would question 31-year-old Blake Merwin’s motivation to open the Gig Harbor Fly Shop in March of 2009, right in the midst of America’s largest financial collapse since the Great Depression. The established flyshop of twenty years, and barely ten miles down the road, had just been forced to close. And Merwin had been successfully running an online flyfishing catalog for five years out of his home, with minimal overheard and operating expenses. He was now shifting operations to a retail storefront in a town of 7,000, in what some would call a backward—and definitely more expensive—move.

Surely, the life expectancy of his western Washington shop would be measured in months, not years. However, this definitely was not the case. Merwin and his staff just celebrated their one-year anniversary—with a full-day blowout of demos and lectures, and food and booze—and the shop was recently awarded “Western Washington’s Best Fishing Gear Shop” by a 24-year-old news magazine seen on Seattle’s local NBC affiliate, edging out almost 20 other established specialty flyshops in the region. 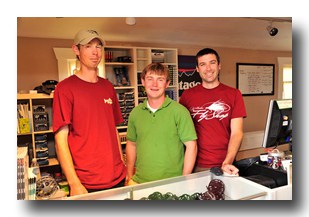 Learn to tie a Sili Shrimp, Hotwire Comet or UVA-Bomber, exclusive shop patterns often spotted on the vise during free Saturday morning tying demos. With plenty of gear and accessories, it’s the tying materials packed floor to ceiling, says Merwin, that bring customers back and help to build those relationships.

As the go-to shop in the South Puget Sound for saltwater fishing, it specializes in sea-run cutthroat, and migratory and resident salmon. Additionally, in late winter, when things slow in the Sound, the shop directs rods toward the fabled runs of Olympic Peninsula winter steelhead.

Merwin’s young staff grew up fishing these waters, and it’s a passion for the sport that helps his business. “Early on,” he says, “I decided to opt for youthful enthusiasm for the sport instead of experience and expertise.”

And when Merwin says he opened the shop because he’s addicted to flyfishing, he means not just the act of being-out-on-the-river-the-tug-is-the-drug problem many anglers face, but everything about the sport, from the gear to the angler community to conservation of the flyfishing environment.

He says his role as a flyshop owner comes with a responsibility to the sport. You might even consider the shop a steward as reflected in the various elements of operations. They have a business membership with the Wild Steelhead Coalition. Employees constantly blog about conservation issues and native trout. And they’ve held numerous movie events bringing awareness to the Pebble Mine and wild steelhead issues, including a tour stop of The Drake film tour.

Still not convinced? With a huge online catalog presence, they have not once purchased any packaging materials. The shop partners with the Northwest Furniture Bank, where Merwin volunteers spare hours to build furniture in exchange for their used packaging material. Even in the shop’s product mix, they prefer to support local and environmentally conscious companies like Scott, Patagonia, and Recycled Waders.

So will these business ideals continue if three to five years down the road this thinking-out-of-the-fly-box approach isn’t paying the bills? To that, Merwin says, “At this point, none of that stuff is up for negotiation.”