If the big bugs don’t show, what’s option B?

Pale Morning Duns are a prolific hatch all summer on the South Fork, and often all day long. In fact, not having PMD patterns in your fly box for a day on this river is like showing up in sweat pants to meet your in-laws for the first time. In other words, go home—you’re better off being a no-show.

If mayflies aren’t your thing, then consider the Spotted Sedge. Most of us would just refer to this as a “medium-sized, brownish caddis,” which makes most of us as accurate as we need to be. The Spotted Sedge, or Cinnamon Caddis is plentiful in both adult and nymph forms, and I’m sure there is some study out there showing that they represent a large amount of a South Fork trout’s diet. My own informal experiments with a #12 rusty Elk Hair Caddis confirms this.

And don’t forget that salmonflies aren’t the only stone on the South Fork. The Yellow Sallies here are actually pink, not yellow. Apparently, the bug was named after a pretty woman in a summer dress. If seeing the common yellow version of this ubiquitous western hatch is akin to seeing Sally in her yellow dress, then I like to imagine that the uncommon pink variation is like seeing her in her underwear (which probably means I should lay off the head cement). Little Pink Sallies tend to come on toward the end of the salmonfly hatch, so it’s a good one to be prepared for if you’re late to the party.

Finally, some fish aren’t taking salmonfly dries because they’re already full from gorging on the huge nymphs. Dainty imitations aren’t going to entice them any more than a cocktail weenie on the table after a pig roast. But chucking a big streamer in this otherwise frustrating situation can often work. You might catch fewer fish, but they’ll likely be bigger and more memorable. —Bruce Smithhammer

After breaking speed limits to arrive on the banks of the Deschutes, you can’t believe your eyes. The riverside grasses and trees are thick with huge salmonflies. It’s on.

You spend the next two hours pitching orange stimmys along the edges of the river. Nothing. The Red Bull rush is wearing off, and you’re starting to wonder what the hell is wrong with this river and these trout and this whole overrated hatch. So you head up to the fly shop in Maupin to see what the man with the beard has to say.

John Hazel of Deschutes Angler Fly Shop has been guiding this hatch since 1978, but he can count on one hand the number of trout he has caught on an orange stimulator. You need better ammo if you want to hook big numbers of trout at this time of year.

If the weather is perfect but orange bugs aren’t working, try a golden stone or a yellow Sally, both of which land on the water to oviposit (Maupinese for “lay eggs”) and are thus much more available to trout than the salmonflies, who drop their eggs from the air. You should also have Norm Woods Specials, Chubby Chernobyls, Chubby Norms, Clark’s Stones, Cutter’s Yellow Sallies, and Silvey’s Chubby Sallies.

Rainbows won’t limit their diet just because you want to fish big bugs, so be ready to change your game. If it gets cool and cloudy, salmonflies will hunker down and mayflies will rule. In mid-day, fish tiny bluewings, a medium sized PMD, or a pink Albert (See pg. 98). In late afternoon, try #10 to 12 pale evening duns, and watch the trout dodge live salmonflies to grab them.

And don’t overlook caddis. This is a staple of the Deschutes trout diet. They eat filet mignon when they can, but they’re quick to return to their Raman noodles. —Amy Hazel

Even during the storied salmonfly Frenzy on the Big Hole, when those big bugs are crawling all around, there are times trout don’t respond as anticipated. Or maybe the hatch is delayed due to weather or water conditions, causing trout to look elsewhere to supplement their diet.

During this frustrating state of affairs, three patterns have turned fish for me when conventional salmonfly patterns like Stimulators or Sofa Pillows draw a blank: Yellow Marabou Muddlers, Cree Woolly Buggers, and large (#6 to 8) Royal Wulffs.

Each has proven itself over the decades. The Marabou Muddler has provoked big trout in every major western river, through every season, and in every type of weather. A Muddler twitched through feeding lanes and holding water is simply too much for certain fish to deny. The innate trigger mechanism in a trout can’t restrain itself when something of size and substance flashes in front of its window.

Woolly Buggers—my favorite being the brown bodied, cree hackled variety—are responsible for as many browns as any pattern I use today. I’ve caught fish on buggers from Montana to the Yukon and from Morocco to Iceland—even into the wilds of South Dakota. Buggers with a more subdued appearance often work when the hot yellow of a Marabou Muddler seems a bit much.

Perhaps flinging large Royal Wulffs qualifies as heresy during a full-blown salmonfly event. But heresy be damned. There are times when trout are sated with salmonflies and something garish still appeals to the feeding urge.

The point: Never be a slave to convention in any arena, flyfishing included. Perhaps a braided chartreuse barracuda pattern would turn the trick. Crazy? You’ll never know until you tie one on and try it. — John Holt

This isn’t really a Plan B Bug, it’s a plan B destination. In the past eight years, I’ve found one, count it, one, salmonfly crawling around in the bank brush of the Roaring Fork River. Sure, they’re around, kind of how sasquatches are around. But unless you want to drive down to the Gunny, Colorado isn’t the best state for salmonflies. The upper Colorado has a few, as does the Blue, and Gore Creek. Even the Poudre up by Fort Collins gets them occasionally, but something about the cold water pouring out of the Frying Pan into the Upper Fork keeps these rivers from reaching the buggy bliss level.

What we do have is drakes. In the RFV, and down through Glenwood Springs, and west on I-70, green drakes reign supreme.

As with any good hatch, I start losing sleep over drakes somewhere in mid-June, depending on river flows. This is when the big mayflies start working up the Colorado toward the Roaring Fork. Size 10-12 patterns flit through my dreams, and even beer starts to take on a pale green hue.

The thing about green drakes here: They start to hatch a half an hour before dusk, and on some really good nights I’ve stood in the river until well after 11, mesmerized, polarized, thunderstruck, unable to make social engagements, transfixed with joy for the power hour(s). 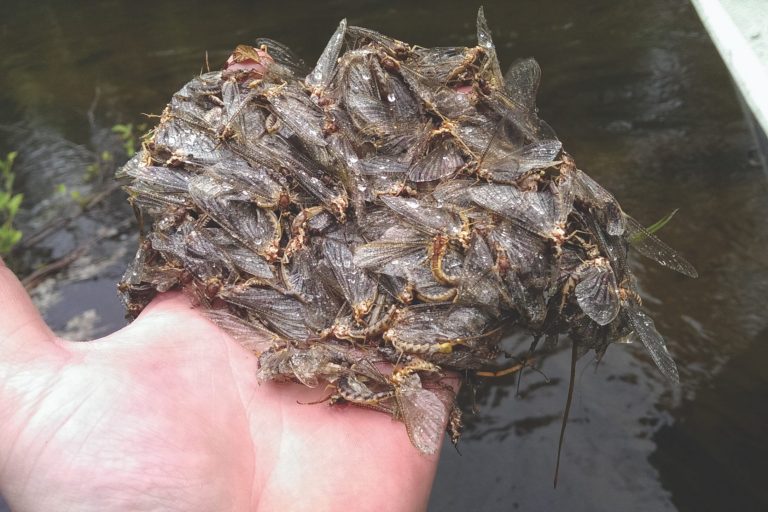