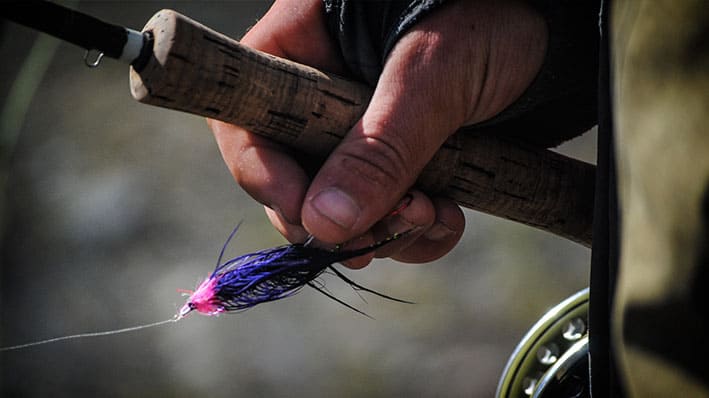 Not that it mattered

I’d planned to fish something new, and was ready for a bold adventure. But then I remembered promising my buddy that I’d do some light mechanical work on his stupid Accord that evening. That guy doesn’t even fish. Anyway, no one likes exploring with a time constraint, so I resigned myself to fishing the same old stupid river I always do.

I usually like to swing the bait-water on weekdays. But when I arrived, the water level revealed that to be a bad idea. Since I’d forgotten my jig and bobber in my other pants, I shot up to the fly water.

I fished a spot that I hate. But there was no one around, so I figured what the hell. I was knee deep and could see my feet, kinda. There was a chance, but not really. I tied on a fly I’d whipped up the previous night. It had heaps of black and orange marabou, complete with rubber legs and crystal flash. It was heavy as a car battery, and less aerodynamic. For reasons I can’t explain, I suddenly thought about Snoop Dogg. Then I got serious and thought about Ted Nugent.

I was throwing casts and walking with the swing for three or four steps. On the road above, a guy drove by with a rod on his hood, but it didn’t bum me out. He didn’t know where to go, obviously. He was driving a pickup. If you want to be a compleat stud on this water, you gotta drive an early-model VW. Just ask me, or my buddy Frank. I wondered if Frank had replaced the vacuum pump on his 1.6D yet. I imagined not. I was coming to the end of the run, and I knew it was hopeless, but it didn’t matter. I just wanted to be standing there. I watched the fly swing across a spot where one would totally be. Just then, at that very moment… oh… OH… I was skunked. I reeled in and walked back to the car.

I cranked it over, and Dire Straits came out of the speakers. They were singing some absolute nonsense about money for nothing and chicks for free. “Now, that’s more like it,” I thought. Down the road a ways, I passed the guy in the pickup. He was parked in a turnout that leads right down to a redd. I figured with the water as high as it was, he wouldn’t be able to destroy many eggs, but that he should still plan on bringing a spare windshield the next time he pulls that stunt.

I stopped in at my favorite camp spot to make sure the bums hadn’t come back. It was empty. But since I was there, I figured I might as well fish, so I set off down the trail. I walked for miles. I was afraid of the cougar, but only because I’m always afraid of the cougar. I was afraid of the river, too. But that’s why I needed to be there. It was way too warm and sunny. I was all hot, and I had to wear my beanie like a South St. hobo just to maintain. I felt ripped off. I mean, I signed up for steelheading in order to be wet and cold, and here it was a beautiful day! At least the river was blown.

A few times, I went crashing through the bushes only to get down to the river and realize there was nowhere to stand. That made me feel better—this was the misery I’d paid good money for. On the way back, I fished a big tailout. I threw snap-Ts from a kneeling position, perched precariously on a mossy ledge. Knowing that steelhead love to catch you off guard, I was doing my best to ignore the swing entirely, even though I was secretly paying attention. It didn’t matter. They were on to me. If I slipped, I was pretty sure that I would drown, or at least be very unhappy. Sometimes I wonder: If I’d discovered this river 10 years ago, would I still be alive today? I was at least twice as dumb back then. Plus, my invincibility gene was in full effect. Now that I’ve smashed myself in a car wreck, and almost drowned in a SoCal rip current, the invincibility gene has dialed back a bit. Plus I’m kinda old now. I walked back to the car.

I fished one more spot and caught a little cutthroat. He was freaking out, but it was his lucky day, because all I did was pull the hook out and drop him back in. He swam straight down and stuck his face in the weeds next to my boot. He needed a few moments to get his thoughts together. Every time I threw a cast, I looked down and there he was. Then I looked and he was gone.

I couldn’t see or hear anyone else, except for an occasional car motoring by on UnoTresOcho. Which was fine, because those people don’t exist anyway. I thought about June, when all the people would come back, and there’d be an RV going by every 15 seconds. It made me sad.

On my drive back, I thought about stopping by Dutch Bros. to hit on the cute chick that works there. But the last couple times I stopped, it was the not-so-cute chick, and some dude. So I bagged it, came home, and worked on my buddy’s stupid Accord.

Matthew Kirk is originally from the Keystone State, but now represents invasive species in Eugene, Oregon. He likes to focus on steelheading and VW maintenance.