Nighttime is the right time

IN MICHIGAN’S AU SABLE RIVER VALLEY — cultural hub of the Water Wonderland — summer’s Hexagenia hatch is the source of much anticipation among river families. This is not just a father-and-son ordeal; entire lineages come out of the woodwork to share one of the richest traditions in the Mitten. Generations of anglers are lured to this muggy riparian zone north of Detroit to sift through fly boxes among wild iris and flashlight beams. Hex is by a1 means a family affair. If house hold habits seem a tad off during this time of year, perhaps the best explanation lies in the solstice happenings of June 21, when many creatures tend toward odd behavior. And somewhere downstream, fish are preparing themselves for an unreal feast.

The largest of the North American mayflies, Hex could challenge any western stonefly to a heavyweight bug bout. After spending a couple years maturing in U-shaped burrows built in mucky, low-gradient river stretches, the nymphs begin feeding on small bits of organic matter, fanning their gills to create micro-currents of fresh water from which they draw oxygen. Duns emerge in the dark, molt, and attain power in numbers, stomachless and horny. Emergence can occur on cloudy afternoons on less storied water, in much the same way that you can win 300 million in a Powerball payout. In other words, don’t count on it.

Hexagenia hatches are frequently documented on Doppler radar. As hordes of mayflies emerge from the bottom of the Upper Mississippi and western Lake Erie, mating swarms produce an abnormal signal that is picked up by meteorological instruments. Attracted to the glow of nearby cities, giant clouds of bugs obscure the stadium lights of several Great Lakes ballparks. An article from the annals of mayfly re search dating from the 1960s shows a photograph of spinners piling up to the headlights of a sedan on a bridge near Winona, Minnesota. The author describes having to shovel his car “free of the wet, greasy mass.” Only recently have stocks begun to recover after decades of pollution and habitat degradation decimated such prolific insect activity.

In the fly shops of historic Grayling, Michigan, gargantuan patterns raise the brows of the uninitiated. One behemoth, the respectably dubbed “main doobie,” has customers reaching for their wallets with little hesitation. It looks like one of those orange circus peanuts with wings. Countless suitable patterns exist, mostly because exact replication isn’t necessary when fishing total darkness. While we all dream of tying on a size four floater to imitate Ephemeroptera, gratification comes not from matching the natural, but from cinching an oversized dry to 10-pound mono and letting it rip into the night.

A few years back, during late June, I was on a fishing trip with a friend and we were speaking on the phone with Au Sable guide Phil Cook. He urged us to abandon our efforts on the lower North Branch and suggested we commute to the trophy water below Mio to fish the hatch. What we witnessed that evening is forever ingrained in my memory, beckoning a return to northern Michigan. Just before nightfall we sat anchored midstream, smoking stogies and working through an insuf ficient supply of Canadian beers. You could feel something in the air, that eerie presence of natural phenomenon. I likened our disposition to the way animals must feel when they know an earthquake is coming.

At first I thought it was wind, but the tree limbs were motionless. What we’d perceived as a slight breeze was actually the sound of an insane amount of mayfly wings flapping dry in the treetops. The bugs waited to take flight until darkness, when they would engage in their timeless courtship. In the following hours a conveyor belt of spent spinners blanketed the stream. It was one of those rare instances that you hear about but don’t really believe—when the fishing suffers because of too many naturals.

A few nights later, upstream, we fished to a pod of slurping brutes and managed to land a few good ones around 1 a.m. The photographic evidence of our catch has our faces looking very similar to others in night fishing shots: stunned by camera flash, dark circles under our eyes, fraught with mania, and hysterically pleased—what I like to call “hex face.” 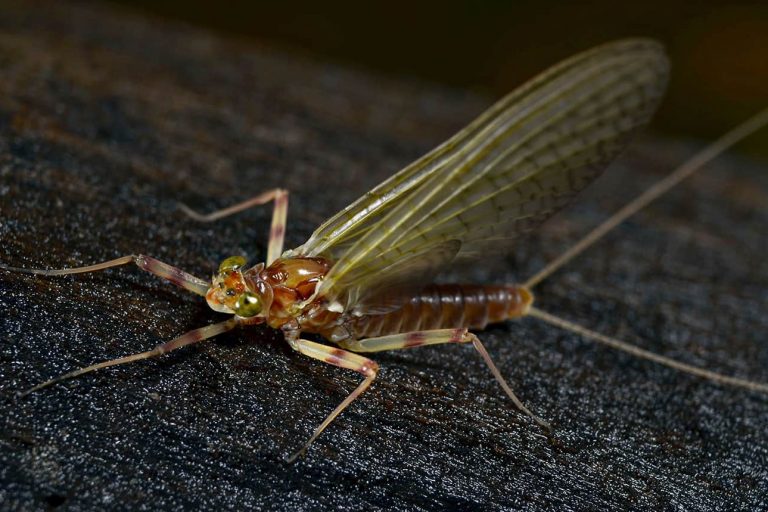