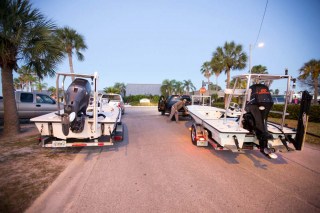 They came, they saw, they won a tournament and made history. All in one day.

RUSKIN, FLA—Chris Hargiss and teammate, Mani Pailer, dominated the 2014 Salty Fly with a back-to-basics approach. Others poled their way into position and threw from the bow with long presentations and sexy patterns. However, Hargiss caught his fish on foot with the simplest of flies—the Bendback.

That traditional saltwater standby led to a three-fish total of 83.25 inches, a Salty Fly record, just ahead of second-place Kapers Murph (80.1) and third-place Leigh West and Jay Wright, who amassed 77 inches.

The tournament format called for two redfish and a trout—total inches, photo release, fly only. Hargiss, a Palm Harbor native, won $1,500, which he split with Pailer.

The two fish together often, so Saturday they decided to work close to their home waters in Sarasota. Efficient and effective, they hustled back to tournament headquarters more than an hour before the deadline, which meant a long wait before official results were announced.

“It was one of those days where everything lined up perfectly,” Hargiss said. “It shows that if you put in enough time, you’ll catch the fish you’ve been looking for. It was just a good day of fishing.”

All of the winning quarry were sight-fished, a style of angling Hargiss honed while owning a kayak for several years before buying a Hell’s Bay skiff several months ago.

“[A kayak] makes you dial in on fish,” Hargiss said. “You don’t want to spend your whole day paddling and expending energy to find them. You learn to pick your tides, the weather, and the time of year for different flats. It makes you focus on the finer points.”

Hargiss, 27, wasn’t the only angler celebrating Saturday evening. Murph was the first solo angler in Salty Fly history to place, and West and Wright were the first team to pull off multiple top-three finishes. The pair took third in 2012.