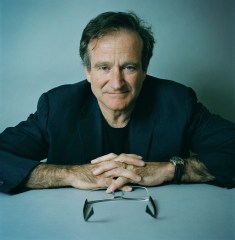 In the mid-’90s I was doing programs for the Canadian Sportsmen’s Show in Vancouver B.C. The event was at B.C. Place Stadium and I stayed in The Georgian Court Hotel across the street.

At that time, the hotel was home to many actors that came to “Hollywood North” for filming. Robin Williams was there and happened to see one of my televised demonstrations. Turned out he was interested in flyfishing and needed some pointers before heading to Alaska. He wanted to learn how to throw a shooting-head with a floating running line. The “Teeny Tip” as it’s called in the business. He contacted the show and asked if I could give him a private demonstration.

Robin had a free morning from filming and we met early before the show opened. He was shy, calm, and small in stature, and once inside the stadium, we started working on his casting at the pond.

Surprisingly, he was quite good. As the show floors started to fill a few people began milling around. He suggested that he might want to make a quick exit if it got too hectic. But he wanted to make a few more casts before he left.

I showed him that a pull or “haul” in flyfishing lingo would add another 10 feet or more to the cast. He was ready to try it. The casting pool had a barrier to protect people from getting hit by the line. Robin let go a cast that went beyond the barrier and hit a biker chick right in the chest as she was walking up the aisle with her boyfriend.

The biker guy was right out of central casting. He was huge, and wore chains and tattoos and leather pants. The girlfriend let out a yell as the line drilled her. As they looked up to see us standing on the casting platform, Robin handed me the rod and stuck his hands in his pockets.

The biker ran down the middle of the pool, water splashing, and heading directly at me. Within a few feet of punching my lights out, he looked up and saw Robin.

“Robin Williams,” he yelled, “you are my hero!” The furious girlfriend demanded that punishment be given to the man holding the rod, me. But within a few minutes there was a crowd and Robin was entertaining everyone.

Security whisked me away and all was forgotten. A couple of nights later, I was having my end of the show dinner and a bottle of champagne showed up with a note from Robin.

It read: “Thanks for the lesson, I now know the Harley-Davidson cast.”