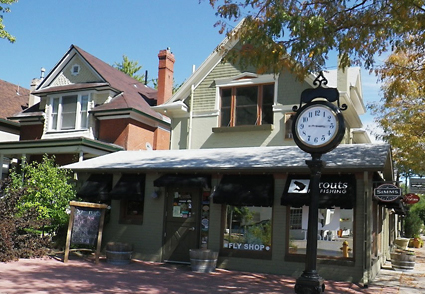 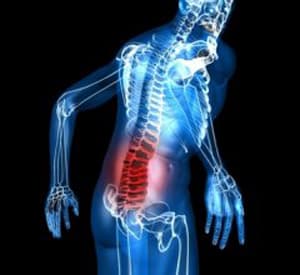 Hello there! My name is Petulant Sciatica, and I am a symptom of significant time spent decaying within a steel and glass coffin on the 27th floor in downtown Denver. Each day I am indirectly exposed to vast amounts of bitter, charcoal-tainted java while my host—his name is Jack—exchanges voicemails and e-mails with others just like him… career office zombies.

Occasionally Jack fields a call from a friend, who attempts to coax him into consuming cool fresh air, while angling clear mountain streams. Jack’s response always falls along the same lines:

“My waders are leaky.”

“My license is expired.”

“My back hurts. Sciatica!”

And so on, and so forth, much to my dismay. 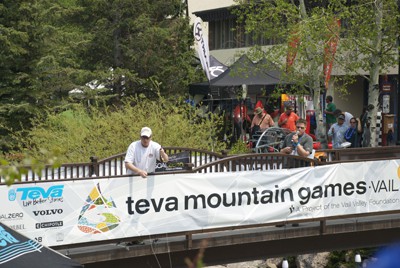 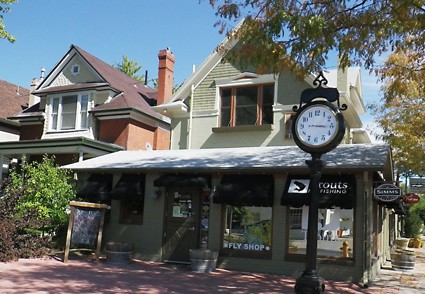 At day’s end, Jack hops into his German-engineered automobile and zips back to his Bank of America-enabled home, located in a politically correct neighborhood. Along the way we pass Trout’s Fly Fishing, a prominent reminder that there are people on this planet that live lives barely resembling Jack’s. While Jack stares down the path to the suburban abyss, I remind him that he’s making a big mistake. And that the lumbar support on the driver’s seat needs servicing.

Jack peeks into the glove box, immediately realizing he is fresh out of Xanax. The soon off-lease luxury sedan swings back around, cuts down a tree-lined urban side street, reaching 6th and Marion before my colleagues (the arms) rip the steering column loose.

Salvation is close at hand.

We cross the threshold, and I immediately feel a swath of endorphins flowing throw my inner reaches. Someone calling himself “Young Cody” greets us, and he looks the part. While YC enthusiastically inquires as to what Jack’s heart desires three Labrador retrievers sniff Jack’s nether regions for signs of canine friendship. One finds some burger grease… and goes to work. 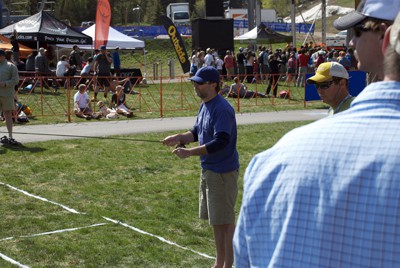 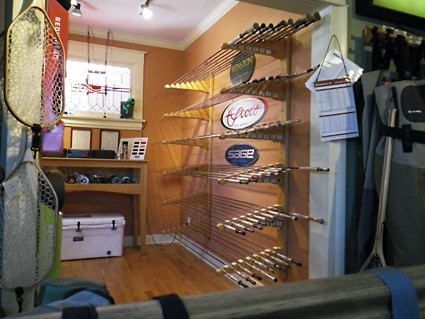 Trays of flies numbering in the many hundreds flank the shop floor. As Jack gazes over them in seeming disbelief, I know his addiction to Elk Hair Caddis and the traditional Adams is no more. He’ll be stripping Sex Dungeons and tossing Chubby Chernobyls on our next outing, if he doesn’t decide to go all-in on saltwater fare first.

The upstairs is where the really juicy goods are. Tucked in a little cove: rods line one wall, lines cover the other, and reels are strategically placed in between. We venture farther to find the waders, boots, packs, and apparel (Jack’s significant other dresses him, so we’ll have to bring her back). Nary a nook or cranny doesn’t contain something worth my buddy’s hard earned cash.

The place is hopping—Marley is being piped in through the ceiling—and Jack overhears someone mention “happy hour.” The Trout’s staff steadfastly declares they live on customer service and Safeway Panini sandwiches. I accept their representations, although while Jack is staring at the fly boxes he steals a glance at the liquor store across the street. I put two and two together, as I often do for Jack… I mean everyone in the joint seems damn happy to be there, and this is a fly shop after all.

As Jack heads for the exit, a couple of dozen flies in hand and a vow to return in his head (I haven’t been too keen on Jack’s Head, at least not until now), Jack peers into the half-open door of the shop office. Four people dressed as though they were peeled right off the pages of the latest Simms catalog are hovering around a computer screen. Jack overhears something about optimum order quantities and waxing floors.

Ok, so the place is clean, really clean, which makes me suspicious. But business talk in a fly shop? I must be dreaming, but I’ll take whatever I can get. Even in the subconscious, Trout’s Fly Fishing is just a short walk from the house.

Jack can really use the exercise.

[Guest blogger Michael Gracie is a renowned expert in tourette-like outbreaks, rashy itches, and obscure skin traumas—mostly thanks to weekly unprotected jaunts in Denver’s frothy South Platte River. He is also the author of 51 Places to Eat Xanax Before You Die. For more information on Trout’s Fly Shop, click troutsflyfishing.com. The Editor.]