Not Your Regular Flyshop 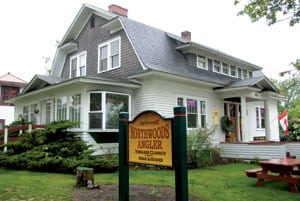 WHITEFISH, MT—Scott Fenwick says Northwoods Angler “isn’t your regular fly shop.” It only takes a few seconds inside to understand what he’s talking about.

There are rare books, collectible paintings, antique signs and surfboards scattered among the requisite flies, rods and other fishing gear. In one room, underneath a television displaying a flyfishing adventure documentary, men share fishing tales and chat jovially.

And in another room, Fenwick excitedly explains several of his possessions, including an old Harley Davidson sitting in the corner.

Allison Mercier browses a magazine while looking for possible women’s wear to sell at Northwood Anglers in Whitefish.

“That’s a 1946 Harley Davidson, restored bolt by bolt,” Fenwick says, before moving on to his surfboard collection, which includes boards he built.

So, no, Northwoods Angler “isn’t your regular fly shop.” But it still has everything you would want in a fly shop, with just a little on top. 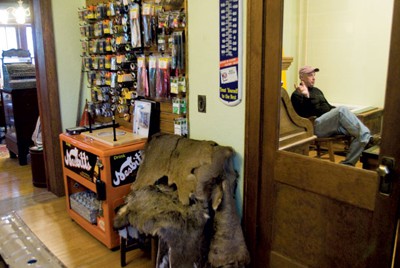 Northwoods Angler opened on East Second Street in Whitefish in March after a good deal of preparation time. Fenwick had a vision and he wanted to make sure the shop properly reflected his vision when it opened – as a store, outfitting hub and generally inviting place to hang out.

During a typical visit to Northwoods Angler, you can buy locally tied flies, get a detailed river report and talk to Fenwick about his most recent watercolor painting or his decades spent in the boat-building business. Or his dog. Or the restoration process for his 1950 truck, which he “found in someone’s field in Polson.” Or, most definitely, you can talk to him about fishing.

Fenwick has been a fishing guide all over the country, from the Florida Keys to “most Western states.” He has also spent more than 30 years as a boat builder.

“I’ve made my living on water my entire life since I was 18,” Fenwick said, adding that he settled down in Whitefish because he wanted “to live in a small community where a handshake still means something.”

Northwoods Angler houses artwork by Chet Reneson and Russell Chatham, as well as rare books by Jeff Cornell. Patagonia merchandise is sold, along with rods made by Thomas & Thomas, Burkheimer Custom and Temple Fork Outfitters. The shop is also a Scientific Anglers flagship store.

Fenwick said he “put a lot of time into studying local shops” to make sure their products don’t overlap.

“We wanted to be more complementing than conflicting,” he said. “We recommend the other shops and they recommend us to customers.”

There is a “record book” in each room in which customers can write their contact information along with a product they are seeking but is not in the store. Fenwick will order it.

“We can usually get it to you in three to five days,” he said.

Lew Patterson and Bob Arend are among the locals who tie flies sold at Northwoods Angler. Fenwick also said custom flies can be tied in house or by someone else locally. Fly-tying materials are sold at the store, and fly casting and tying lessons are offered.

“I can’t stress it enough – keep the money in the local economy,” Fenwick said. 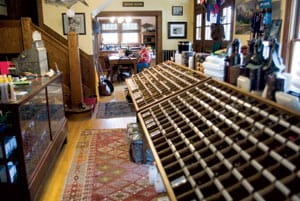 Northwoods Angler is a new flyfishing and guide service on U.S. Highway 93 in Whitefish.

Northwoods Angler works with Kalispell outfitter Russ Hadley, who offers guided fishing trips on local lakes and the Flathead River, along with extended outings to the Clark Fork and Missouri. The shop also works with an outfitter on the Blackfeet Indian Reservation, as well as one in South America’s Patagonia. Fenwick is adding outfitters in Belize, the Keys and Flamingo in Florida, and the Bahamas.

“People go through us to get to them,” Fenwick said. “We’re basically air traffic control for the outfitters.”

Fenwick rattled off a long list of locals who have helped him get on his feet and who continue to help him grow his shop.

“The key to this whole thing has been the local support and surrounding ourselves with the right people,” he said. “That’s what made this place.”