THE YELLOWSTONE RIVER’S pristine headwaters are tucked into some of the most remote land in the Lower 48, draining roughly 70,000 square miles across Wyoming and Montana. These wild waters serve as a stronghold for native Yellowstone cutthroat, and, combined with Yellowstone Lake, make up the largest inland population of cutthroat in the world.

Because of this wildness, the Yellowstone is unpredictable and challenging. Rarely does tomorrow fish like today. Hatches are localized, and will move from one morning to the next. Miles-long mud-plugs frequently make their way through the system, sending guides and anglers up or downstream, chasing clearer water. A day fishing the Yellowstone is an immersion in and acknowledgement of the ecosystem that surrounds it— sandhill cranes overhead, a whitetail deer in the willows, the last light slipping off the 10,000-foot peaks of the Absarokas.

But too often humans want to tame what’s wild, and anglers aren’t the only ones attracted to this place. When the Western U.S. was just beginning to develop its natural resources, and the first train had yet to arrive in Livingston, Montana, President Ulysses S. Grant signed into law the General Mining Act of 1872, aimed at “promoting the Development of the Mining Resources of the United States.” The law deemed mining as the highest and best use of our shared resources, and it served as a response to the many prospectors and job seekers moving into newly acquired lands in the American West.

Today, those old mining districts are colliding with the realities of a new, entrepreneurial- and amenity-based economy along the banks of the Yellowstone. Yet the same old law remains on the books, 145 years later. Public lands have become an economic driver all their own, as anyone in Montana will be happy to tell you. Not only does Montana’s Paradise Valley thrive on the visitors streaming through it into Yellowstone National Park’s only year-round entrance, but public lands have also attracted new business owners who market the region’s quality of life to their employees.

“Even the businesses here that aren’t dependent on tourism are dependent on the workforce,” says Andrew Field, owner of Printing for Less, one of Livingston’s largest employers. “I know that, in our case, our people are here in large part because of what Paradise Valley and the Livingston area offers them. Putting the natural beauty of this area at risk also puts our economic viability at risk.”

In the summer of 2015, when the ambitions of two mining companies—Lucky Minerals, of Vancouver, British Columbia, and Crevice Mining Group, of Spokane, Washington—were found to include large-scale development on public and private lands, property and businesses owners in the valley started asking hard questions. This wasn’t just another proposal to poke a few holes in the ground. If exploratory drilling on private lands yields favorable results, then those General Mining Law claims could extend that drilling onto adjacent public land, including lands along the northern border of Yellowstone National Park, which lie well within the Yellowstone River watershed.

On its website, Lucky Minerals is marketing a one- to twobillion-ton “porphyry” system (copper deposits formed from hydrothermal fluids). And two billion tons of anything coming out of the ground leaves a very large hole behind. While the drilling on private land would be relatively small, if combined with the claims on adjacent public land, these projects could mushroom into a major development that worries valley residents.

In March 2016, in response to the increasingly aggressive agenda of the mining companies, a collection of local businesses, supported by conservation groups, formed the Yellowstone Gateway Business Coalition (YGBC), with a singular goal of preventing the mines from becoming reality. The YGBC is bipartisan, and their angle is simple economics: The proposed mines are a serious threat to local businesses’ viability.

The YGBC started fast, launching with overnight support from more than 100 businesses. The group now numbers nearly 400 local and national companies, including heavy representation from anglers. More than 40 flyfishing brands, outfitters, and guides have signed on to voice their support for keeping the Yellowstone free from any negative mining impacts. Forty percent of those who travel to Montana to fish come to Park County, spending more than $70 million annually. There are eight fly shops on the Yellowstone River between Gardiner and Livingston alone, and at least another half-dozen in Bozeman. Industry-leading brands are clearly invested in Paradise Valley as well. Simms kicked off their Save Our Streams program with their home water of the Yellowstone, and the Joshua Green Corporation, parent company of Sage, Redington, and RIO, is currently constructing the Sage Lodge in Emigrant.

“People have been coming to flyfish the Yellowstone and recreate in Paradise Valley for a long time,” says Matson Rogers, owner of Angler’s West fly shop in Emigrant. “Dan Bailey started his shop in Livingston in the 1930s. Having active gold mines in the heart of Paradise Valley would fly completely in the face of the people who live here, and, frankly, in the face of all the guests that visit each year.”

So far, the message from the YGBC has been heard. In November 2016, then-Secretary of the Interior Sally Jewell announced a two-year “time-out” on mining activity on 30,000 acres of public land near the northern entrance to Yellowstone. The two-year moratorium was a great start, but only temporary, and more than a year has already gone by, with both mining companies salivating on the sidelines. The same day that Secretary Jewell announced a two-year time-out, Montana’s Senator Jon Tester (D) said he wanted to protect these public lands from mining forever—the only way he can—by Congressional action. Senator Tester’s pledge to introduce a bill into Congress was met with joyous approval from Paradise Valley business owners and residents, and in April 2017 the Yellowstone Gateway Protection Act (YGPA) landed in the U.S. Senate. 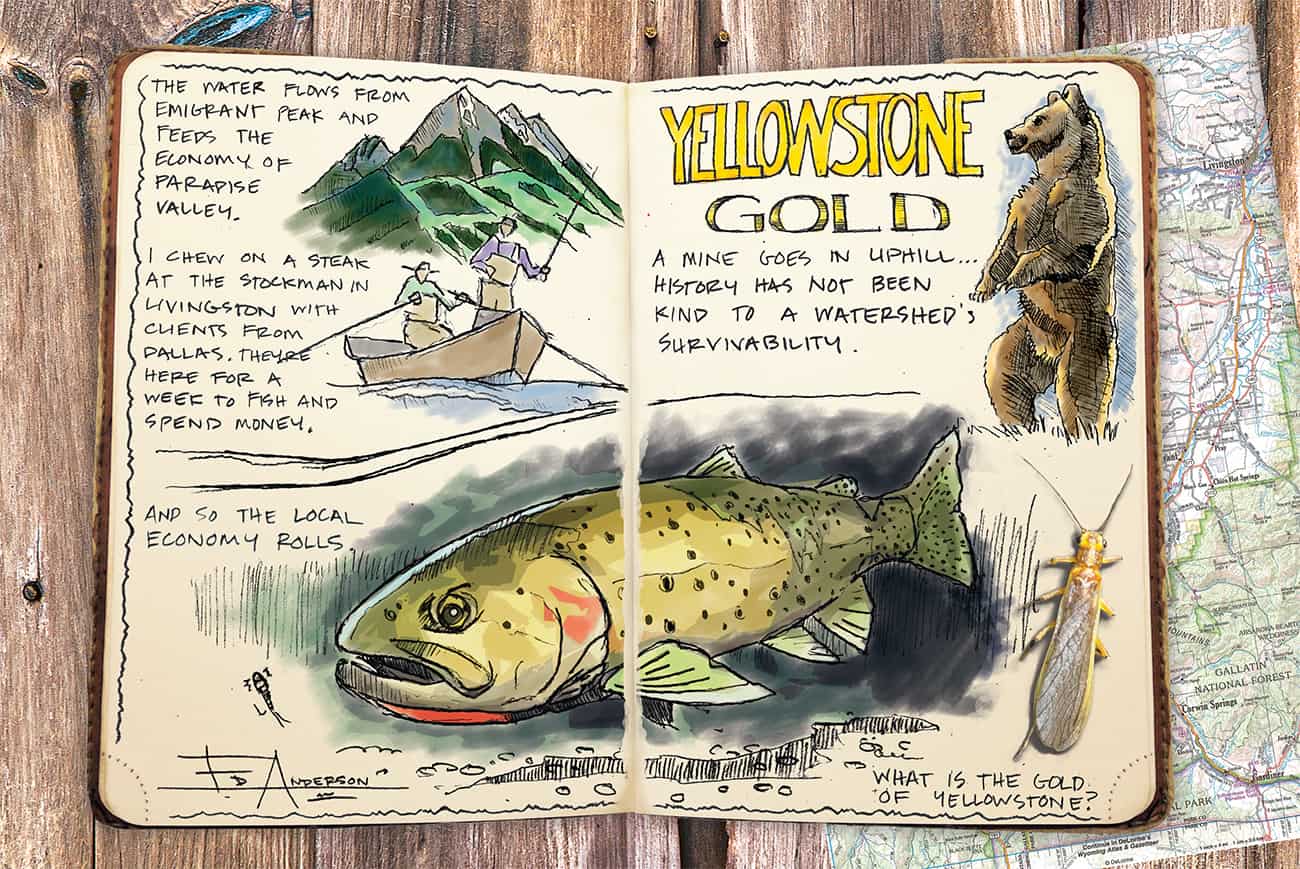 With near-unanimous local, bi-partisan support, the effort to protect Paradise Valley has moved faster than anyone could have predicted. With our first national park and our blue-ribbon Yellowstone River at stake, most people were quick to agree and to act. Spirits were high for members of the YGBC the day in late July when Senator Tester’s bill received a Congressional hearing. But now its fate is unknown.

The same day that Senator Tester made the case for Paradise Valley, the State of Montana granted Lucky Minerals a permit for exploratory drilling on its private-land claims. It was a sobering reminder that the battle is far from over—industrial traffic and infrastructure are coming. While Lucky Minerals prepares to start drilling in summer 2018, it appears that the YGPA’s future depends on its ability to earn bipartisan support.

Montana Senator Steve Daines (R) has called the bill an “important piece of legislation” and agrees that the northern border of Yellowstone is not the place for mining development—but he has stopped short of formally supporting it.

Newly-elected Montana Congressman Greg Gianforte (R), introduced a companion bill in the House—the Yellowstone Gateway Protection Act (H.R. 4644) in mid-December, which would withdraw mineral rights and ban mining operations on public land in an area north of the park. This bill enjoys strong public and business support from the community, and deserves the full support of Montana’s delegation.

Senator Daines has said, “I support efforts for permanent withdrawal.” Yet he won’t support the current Senate bill. Why? Rivers don’t respond to posturing; either you’re for protecting it, or you’re not.

Anglers from around the country hope, and are beginning to demand, that these elected officials take their responsibility seriously. They hold the key to ensuring that our beloved Yellowstone doesn’t end up like so many other rivers we know, with unhealthy fish and depleted fisheries.

This winter, Bozeman-based filmmaker RC Cone brings us to the banks of the Yellowstone with his latest film, Last Call: Our Fight for the Yellowstone, debuting in the Fly Fishing Film Tour. The storyline weaves a multi-generational journey through the Paradise Valley, and if you can’t fish there yourself this year, seeing the film will make you want to plan a visit.

Lucky Minerals held public informational meetings in Bozeman and Livingston during the first week of November, attempting to rally support. While the easy, permanent solution still exists in Sen. Tester’s legislation, the politicians keep at it, while frustration builds. But the coalition’s mission and resolve remains: keep these mines out of the Yellowstone Gateway.