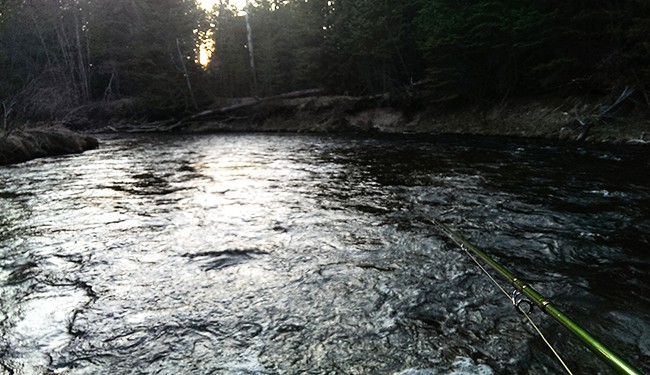 With so many miles of special regs water open year-round, you’d think Michigan’s trout opener would have become largely insignificant by 2015. Yet most anglers still consider the last Saturday a holiday—including myself. In fact, as I walked out of a party store with celebratory provisions on a Friday night, a local fly shop owner on his way in for some of the same greeted me with a, “Happy New Year!” Like singing Auld Lang Syne at midnight on January 1, northern Michigan trout fishermen practice various opening day traditions that border on religious rituals to celebrate a fresh crack at another trout season.

Saturday morning we slept in on purpose, ate a big breakfast, cleaned up camp, and finally got around to getting the boats in the water just before lunch. After launching, I dropped anchor and played Mozart on my phone while we smoked swisher sweets and passed a three-dollar pint of blackberry brandy back and forth. This annual tradition purposely gets more corny from one year to the next, and is more about making fun of ourselves than celebrating our status as masters of the universe. 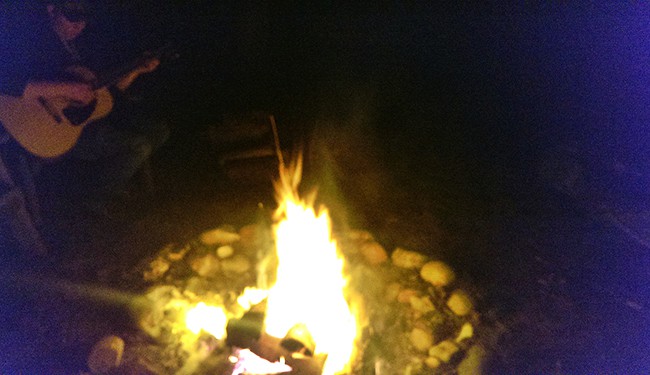 On Sunday we launched John’s Au Sable Riverboat. These boats have been running the Au Sable since they were designed here in the 1870s for lumberjacks to quickly move supplies up and down the river system. Originally constructed of cedar and white pine, they have no keel and are controlled by a push pole at the stern, or by paddling between fishing spots. Most are about 24-feet long and have minimal draft, even when loaded with gear and fishermen.

Rube Babbit was one of the first fishing guides on the Au Sable, and in the 1880s someone from the Babbit family modified the boat’s design to include a livewell where water flowed into and out of a box built into the boat to keep fish fresh. Fun fact: Rube is credited with being the guy who first planted brook trout in the river’s East Branch. 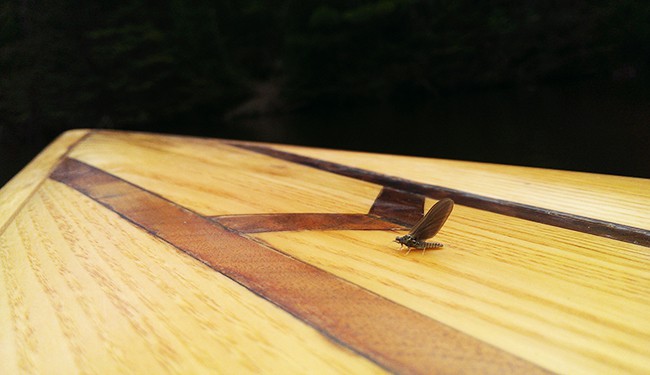 Au Sable Riverboats are great for stealthily approaching rising fish, but would be the last boat you’d want for running Class IV rapids. They’re more stable than a canoe, but are very capable of tipping if you’re not careful. With a good guide on the push pole, you can fish while standing, but generally fishing is done from a seated position at the bow. I have no regrets about going with a drift boat for guiding, they’re more versatile and more comfortable for the client. That said, building an Au Sable Riverboat is at the top of my bucket list, and will hopefully kick off this winter. I don’t have a lot of carpentry experience, but I did stay at a Holiday Inn Express once. Should be a piece of cake, right?

John is one of the best nymphers I know, but he is an even better cook. When the fishing gods hand you lemons, you give them to John and he’ll squeeze them into the homemade guacamole he’s making on a rock under some tag alders to go on venison tacos. 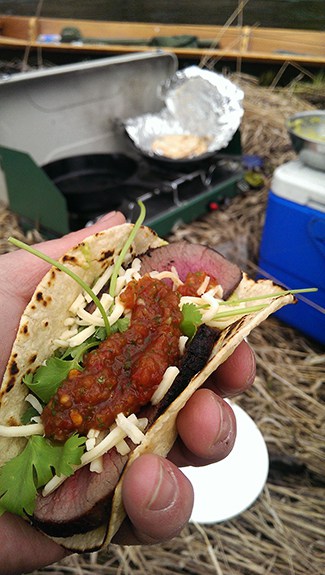 John missed a couple nymphing, nothing showed any interest in streamers, and I blew a shot at a brown trout sighted under a cedar bough. I saw a lot of BWOs hatching both days, a smattering of Hendricksons, and never saw a rise. At one point during lunch with John I thought I saw a surface eat, and then we both stood and stared at that spot on the water for a solid 15-minutes, letting our minds play tricks on us without any type of affirmation.

At the end of the day, it just felt good to be chasing bugs again.