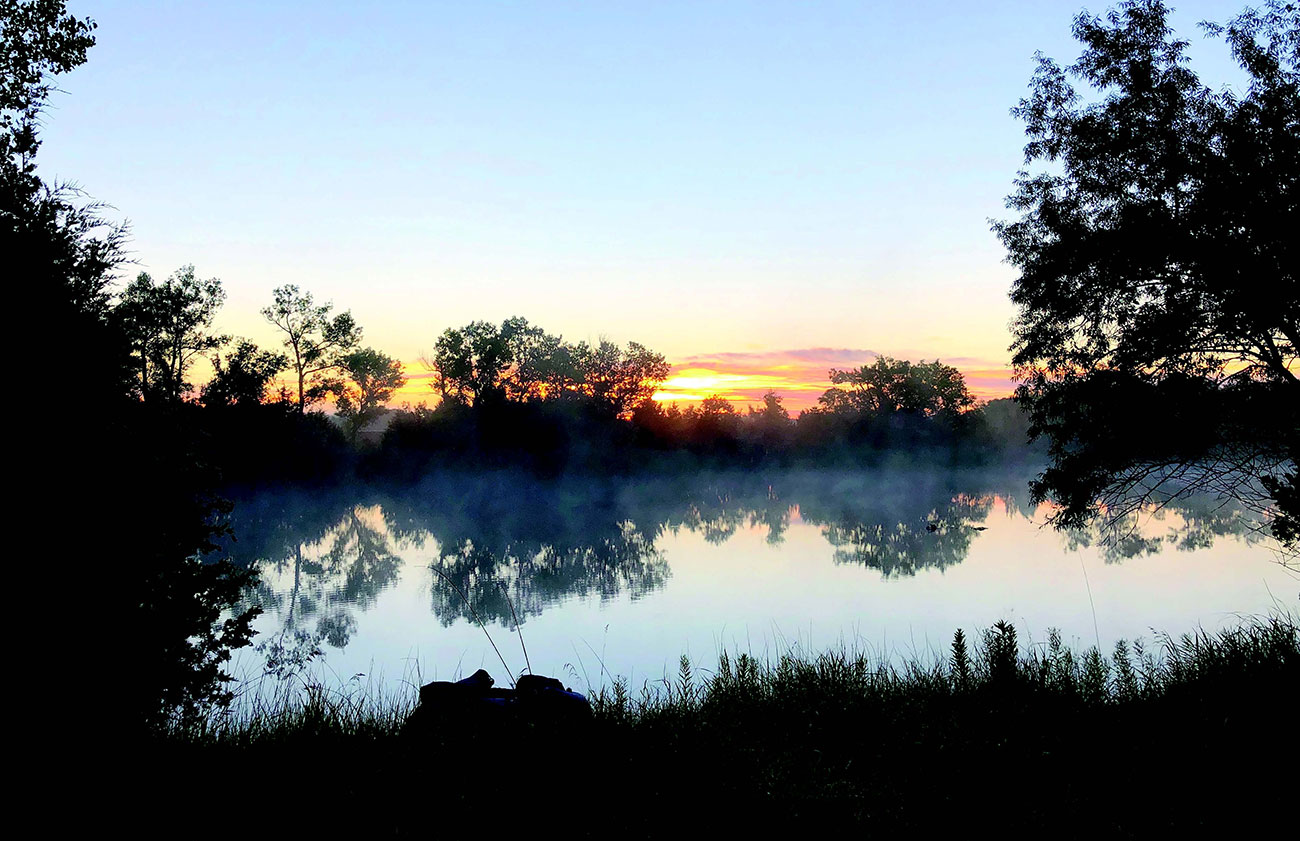 Sowbellies and baseball in the Cornhusker State

Dawn comes early to southern Nebraska on the 16th of June. Nautical twilight, second of the earth’s three twilight phases, begins before 5 a.m. in Kearney, a town of some 30,000 sitting just off I-80 about three hours west of Omaha. I stopped in Kearney last summer on my way to the College World Series (CWS), and though sunrise was still an hour away, temps were already inching toward 70 and the largemouth were hitting poppers on Kea Lake—conveniently wedged between the freeway and a Best Western with a poachable breakfast bar. After landing a couple fat 15-inchers from the shoreline lily pads, I threw my float-tube back in the truck, helped myself to some hotel waffles, and headed on down the highway.

Twenty-acre Kea Lake is part of the Kea Lake Wildlife Management Area (WMA), one of around 60 public ponds and lakes found along the 350-mile stretch of Nebraska I-80 running east from Big Springs (where I-76 joins from Denver) to Omaha (where Oregon State University goes to win National Championships). Whether you’re a college baseball fan or not, this drive is worth it for the bass fishing alone. As long as you’ve got a float-tube, canoe, or kayak, and don’t mind a semi-truck soundtrack, the opportunities to toss poppers at largemouth are virtually endless on this bassy stretch of Interstate.

The idea to turn hundreds of borrow-pit ponds and lakes into a public resource is generally credited to both Willard Barbee, who served as the Director of the Nebraska Game and Parks Commission (NGPC) from the mid 1950s through the mid 1970s, when I-80 was being built along the Platte River Valley; and Mel Steen, who ran the Commission’s Fisheries Division. Constructing freeway off-ramps and overpasses requires a lot of sand and gravel, so each time a pit was dug in the floodplain, the valley’s high water-table would refill it with groundwater and the state would toss some fish into its newly created basshole.

“Barbee told the Department of Roads people that he wanted those ponds for public fisheries,” says Daryl Bauer, who manages the NGPC fisheries outreach program, and who joined me for a morning of smallie fishing on 14-acre War Axe Lake, the only lake in Nebraska’s I-80 system specifically managed for smallmouth. “So we got the ponds. And we started stocking them right away.”

In the 50 years since, some of the lakes have become State Recreation Areas (SRAs), complete with improved campgrounds, boat ramps, and restrooms. (SRAs, like War Axe, typically require a separate pass.) A few others have been relegated to little more than rest-area bluegill ponds. But the majority are something in between: WMAs featuring a 15- to 30-acre lake, clear water less than 20 feet deep, and a shoreline of bitchin’ bass habitat. Some lakes are managed for bigger bass, while others are managed for higher numbers. “Largemouth bass, bluegill, and channel cats are the bread and butter,” says Bauer. Other flyfish-friendly species include crappie, carp, redear sunfish (shellcracker), and a few pike. 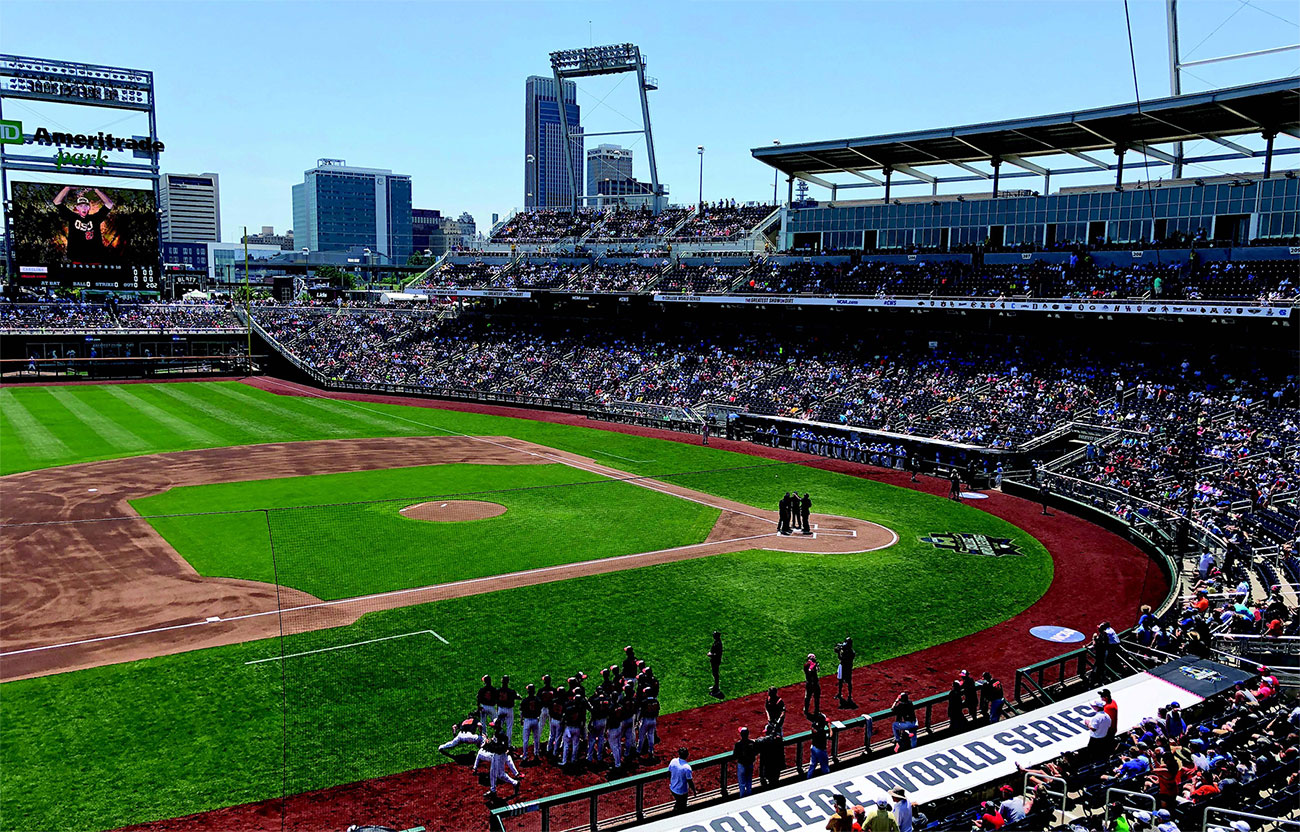 I left Denver early in the morning on June 15, with my Beavs set to face North Carolina the following night in Omaha, where the CWS has been held every June since 1950. Two and a half hours later I stepped out of my truck to the smell of fertilizer and corn farms, and was soon throwing a deer-hair frog toward the lily pads on Goldeneye WMA, a 17-acre crappie and largemouth pond near Big Springs (population 400). I had a stellar morning, catching several 13- to 15-inch largemouth and a dozen crappie. My next two stops of the morning were East Sutherland Lake and East Hershey Lake, both WMAs sitting just west of North Platte. I’d fished these two lakes in 2017 as well, after a talented LSU squad sent Oregon State home early. East Sutherland is one of the few I-80 lakes with pike in it, and is also one of only three with catch-and-release regs. The resulting largemouth fishing was the saving grace for me on this first leg, because the Tarheels beat OSU the following night, sending the Beavs to the loser’s bracket and sending me, the loser fan, back home to Denver in shame.

But Oregon State loves the loser’s bracket. The school’s first national title run, in 2006, began with an 11-1 ass-whooping by Miami (of Florida, not Ohio). I was en route to Omaha that year as well, but—being a Beaver non-believer back then—promptly turned around in disgust. Back home, I watched them rip through the loser’s bracket to win the title. I wouldn’t make the same mistake in 2018. On June 23, the Beavs eliminated Mississippi State and were headed back to the Championship Series. So I was headed back to Omaha, via plenty more I-80 bass chasin’.

A few dozen panfish ponds scattered along a flatlands freeway may not sound very impressive to the typical spoiled Westerner. But if anything about public lands has become clear the past couple of years, it’s that far too many Americans have taken them for granted, especially those of us who grew up in states like Oregon, Idaho, California, or Utah, each of which is made up of more than 50 percent public land. Alaska and Nevada easily lead the nation in highest percentages, at nearly 97 and 88 percent, respectively. But Nebraska is at the other end of that spectrum. Just 2.8 percent of the Cornhusker State is public, placing it 48th nationally, behind only Kansas and Rhode Island. All of which makes these gratifying little bass lakes feel even more valuable.

I drove east from Denver in the dark, past Big Springs and North Platte. By the time I hit Maxwell, daylight was just starting to show, so I took Exit 199 at the next town, Brady, and hit six-acre West Brady WMA, another C&R lake. It was superb.

“The nice thing about our catch-and-release lakes,” says Bauer, “is that they generally have larger bass. And if you don’t like releasing fish, you can just go five minutes down the road to the next one.”

Yes you can. But be prepared for the sometimes comical gravel-road routes you must drive to actually reach the lake you saw next to the freeway. I’ve now fished 14 lakes in all, and have barely begun. Just the 150-mile stretch from North Platte to Grand Island has more than 40 fishable ponds—each worth exploring.

On June 28th, Oregon State beat Arkansas 5-0 to take their third College World Series title. And all felt right in the world.