Google Maps had led me astray. I had typed in “flyshop” but found myself in a strip mall parking lot. Before I could reroute myself I caught a glimpse of a 1976 Ford Custom Ranger truck covered in trouty spots. Maybe I was in the right place. Sure enough, a hand-painted sign informed me that I had made it to Bozeman’s Montana Troutfitters.

Though Bozeman is now commonly seen as the center of the flyfishing world, in 1978, that wasn’t the case. “There were sporting goods stores in town that sold flyfishing gear, but no specialty flyshops,” recalls Dave Kumlien. Kumlien and his wife, Karen decided to fill this void. In November of 1978, they opened Bozeman’s first flyshop.

“Bozeman was ready. We didn’t blow the doors off the place but we opened up with customers ready for us,” Kumlien told me over the phone. He spoke fondly of those first few years, back when the shop was known as “Wild Wings Gallery.” Within a few years, another shop opened in town. Initially, this caused a dip in growth (and morale), but in hindsight, Kumlien now sees this as a positive development. “Having two really good, full-service flyshops in town gave Bozeman some credibility as a flyfishing destination. Frankly, people began realizing the Bozeman shops could take them to fish any of the waters around.”

Bozeman, the flyfishing industry, and Montana Troutfitters grew in unison until all three exploded with the release of A River Runs Through It in 1992. “People started coming from all across the country to try to capture what they saw in the movie.” Kumlien recalls outfitting the camera crew with waders and rain gear. “We definitely benefited from that movie.”

In 1998, after 20 years of operation, The Kumliens sold Montana Troutfitters. The shop changed hands a few times over the next decade. In 2010, during the height of the Great Recession, Justin and Lisa King left their careers in construction and nonprofit education to enter an even riskier field. “We knew we were throwing the dice at it, but with Troutfitters’ reputation as the oldest flyshop in this town, we knew we could make a pretty good go of it.” The Kings must be doing something right, because Montana Troutfitters is still kicking. Justin grew up in Bozeman and remembers lingering around the shop as a kid. Now his two kids get to do the same. 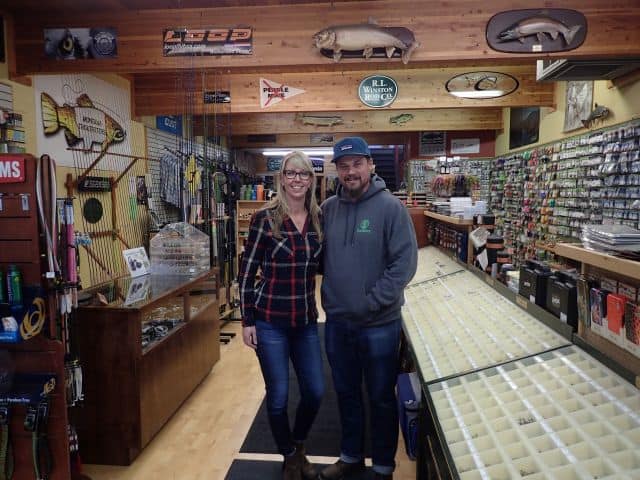 These days, Troutfitters has two seasons to which they are equally committed: Locals and Tourists. “We definitely see those locals more in the wintertime. That’s when they come in for fishing and tying materials,” King says. When the air temperatures and rivers start heating up, flyfishing-minded tourists descend upon Bozeman in droves. “We run between 20 and 30 guides in the summertime. That’s obviously our busiest season. We get people coming from all over the world. The locals kind of go and hide a little bit.”

In addition to the the guiding and outfitting, Montana Troutfitters prides itself as a full-service, old school brick and mortar flyshop—hardgoods in the front, tying materials in the middle, and softgoods relegated to the back corner. “We might sell a few novelty items like coozies and flasks, but other than that it’s all flyfishing,” King explained as he showed me around the shop. I argued that alcohol paraphernalia is also essential to flyfishing.

Troutfitters carries all the rods, reels, lines, and accessories you see in every flyshop, but their 2,000+ bins of flies make them stand out. “We really pride ourselves on our selection of bugs. Being in Bozeman, we’re central to so many rivers like the Yellowstone, upper and lower Madison, the Missouri, the Big Hole, Beaverhead. We kinda have to have it all.”

It’s been seven years since Justin and Lisa King took over Montana Troutfitters, so I asked them if they could sum up their experience with the shop in one word. “Great,” Justin said with an unamused smirk. Lisa went on, “It was a steep learning curve, but I wouldn’t trade it for anything. It’s an awesome lifestyle for us and our family.” I asked them if they had any big plans for the next seven years. Justin answered this one. “What’s that old saying? ‘If it ain’t broke, don’t fix it?’ We’ll just keep it the same old shop.” I couldn’t argue with that response.

Join Montana Troutfitters on Thursday, June 15 for their 11th annual Troutfitters Barbecue. They promise that this year will be better than ever, with $2 microbrews from MAP brewing, $1 hotdogs and burgers, and a special performance from the band Skavacado. Come for the cheap grub but make sure to stick around for the dirty hat contest and the big raffle. They hope to see you there from 4:30 p.m. to 8 p.m.

Check out the Montana Troutfitters website for more info.